US metal titans Metal Church will be the very special guest of WVOX Metal Mayhem host Matthew O'Shaughnessy on Tuesday night, March 3rd at 9:45pm Eastern heard worldwide at http://www.wvox.com/ and locally at 1460 AM. Metal Church came roaring out of the west coast thriving metal scene in the 1980's and always marched to the beat of their own innovative powerful sound, never following trends or fashions to their great credit. The band will talk with O'Shaughnessy about their latest tour itinerary, upcoming New York area shows and latest album and tenth studio album, Generation Nothing.

"The sheer magnitude and force of the mighty Metal Church's music has always been a primary staple of WVOX's metal playlist going back to the early 1980's and today. It's another headbanging honor to welcome the band back to Metal Mayhem." comments Matthew O'Shaughnessy.

Read our Magazine’s Review of Metal Church’s Album Generation Nothing, Voted as one of the TOP TEN Breakout Albums of the Year in Xombiewoof Magazine’s 2013 Year in Review

Summon the Congregation – with their newest album - Generation Nothing, Metal Church Commands the Masses!

“To say that Metal Church is one of the best of American Heavy Metal is an understatement, they are among Metal’s “Founding Fathers” in Metal and have not dulled with age, in fact they have excelled in their skills, the musical composition is sublime and the Vocals on Generation Nothing are hard, edgy, driven and rich in lyrical context.” 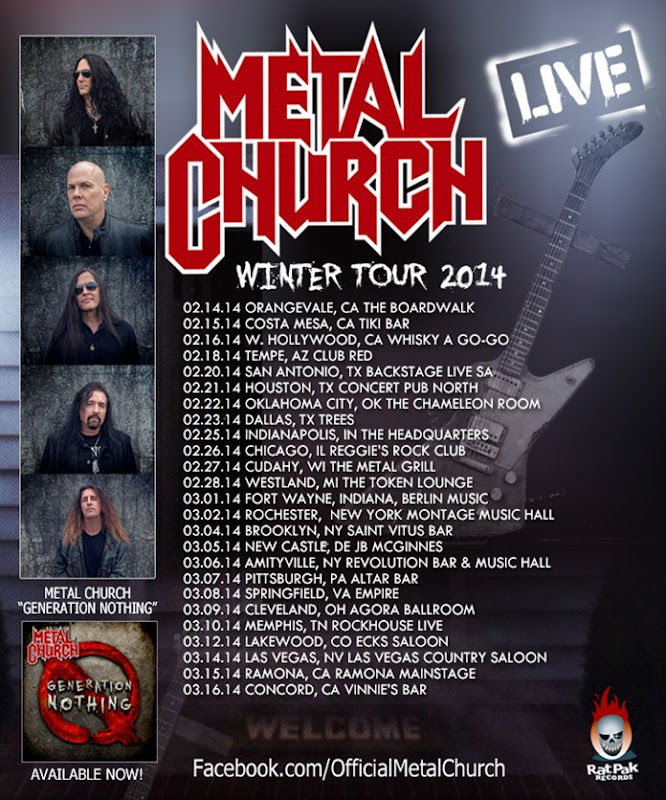