"ALL ABOARD!!!".... ROCKIN OUT WITH LITTLE OZZY ON THE CRAZY TRAIN CALLED LIFE

An Interview with Lisa "Sunshine" Svelnys 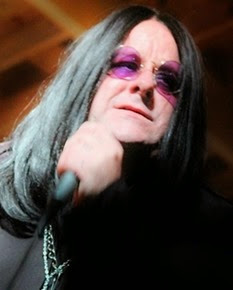 Certain performers are unforgettable and captivate anyone and everyone that witnesses their performances. On season 7 of "America's Got Talent", I was one of the millions that witnessed "Little Ozzy" melt Sharon Osbourne's heart.

Although it was a "pass" for her, it was obvious to everyone that watched, she may have been hiding a tear, and “Little Ozzy” definitely touched her.

This legendary TV moment soared Little Ozzy to the 4th most looked up search on the internet for 12 minutes in THE WORLD. I was lucky enough to cross paths with Little Ozzy recently, there is so much more to him, he has to be easily, one of the most fascinating people I have met yet. I hope you enjoy this interview as much as I have.

Lisa: What do you enjoy most about performing?

Little Ozzy: I enjoy dressing up putting the eyeliner on and going out there show after show and blowing minds as a compact version of the Prince of Darkness, the real Father of Metal, OZZY! There is nothing like getting up there and making that happen! 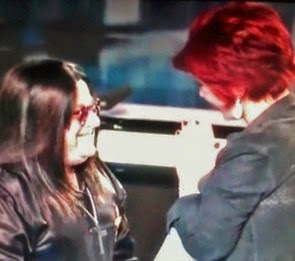 Lisa: How did it feel to fulfill your goal of performing in front of Sharon Osbourne on Season 7 of "America's Got Talent",,, what kind of "rush" was that?

Little Ozzy: It never really hit me until I was backstage and saw her face in person sitting next to Howard Stern. I thought WOW this is really happening. AGT sought me out. They were looking for a Little Ozzy to place on the show for Sharon! They “Googled” Little Ozzy and I was the only one in the world! They do things like this to keep shows interesting. They told me I would not move forward, however 4.5 million viewers will see you the first airing! I thought, wow! This is good publicity and I could not even purchase this sort of media! It was awesome! Sharon was the most genuine, kindhearted person. She must have thanked me 50 times for singing her song to her. She sent for me right after my performance and the recording was over. I was hugged by Sharon and told by her I was great! She said thank you so much and from my heart for singing this. It really meant a lot! I kind of feel like I am endorsed by her because I know she loved me! That was worth a million dollars to me!

Lisa: When was the moment you realized that you "touched" Sharon deeply in an emotional way on the show? 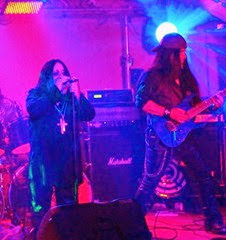 Little Ozzy: I knew she approved when she made eye contact with me and held both of her arms out as to say in body language! I LOVE LITTLE OZZY AND YOU KEEP SINGING BECAUSE I WILL NOT HIT THIS X! It was really neat! We had a moment! If you watch the clip you can see it unfold. When I first walked out she turned her head away and I thought, “She hates me”!

As I began to speak I think she heard sincerity as I began to sing her song that her husband wrote for her, I had no idea he was away, I did however hand pick that song and push for it because I knew it would flatter her. It worked out! Howard and Howie did hit the X however no one ever booed me while I was performing. When the show came out I was amazed how good they did editing the “boos” in and other clips of the audience holding their arms up in an X, it never really happened, the magic of TV!

The good thing is even the booing turned out to my favor because 95% of the people that comment on the video that has passed millions of views are pissed at the audience for booing! They all love Little Ozzy! You cannot fool the people, they want something real and that is what I am….. I am very real!

Lisa: What inspired you to become an Ozzy tribute performer?

Little Ozzy: I have been doing Little Ozzy for four years! What inspired me to do this was the fact that I spent four years on the road with the band Mini Kiss, and it is not real, they are not a real band, It is entertainment. It is 4 little people just dressed like Kiss and singing to Karoke, backing tracks. What amazed me was the fact that Mini Kiss was doing this all over the country in some of the biggest venues ever! Vegas casinos, The Luxor, we played with Tesla, Queensrÿche, Frampton, You name it! We were the personal entertainment for Def Leppard and Journey at their end of tour party in the French Quarter, 30 people total at the party! I just knew, how much more I could do if I stepped out and did this on my own as a real performer, a real singer, and with the most awesome hard rock musicians I can find! Boom, we are there now! We have a two hour show that will blow the fans down! Ozzy has always been my favorite performer, his music has always been the best and well,I kind of look like him and I am told I sound exactly like him when I sing! 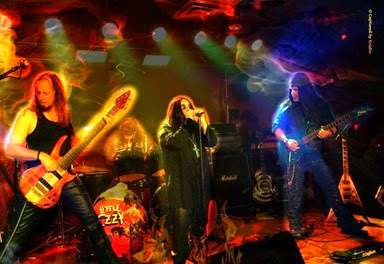 Lisa: The BEST feeling in the world is?

Little Ozzy: Seeing your vision and your dreams unfold before your eyes. There is surely something bigger out there looking out for us when we seek the things we dream of.

Lisa: What has been the most exciting moment as "Little Ozzy" thus far?

Little Ozzy: Oh wow! It is hard to pinpoint that. I would surely say the best thing that has happened to me as Little Ozzy was meeting Ozzy Osbourne's Wife Sharon! I have always loved her as well and followed her as his manager! She is a hardworking, tough woman! However I would say Meeting the brother of Randy Rhoads, Kelle Rhoads was also a very cool spiritual thing for me. When filming Tat Nightmares in Burbank I realized I was only 2 miles from Randy Rhoads Mothers music school MUSONIA. I decided to ride by and get a picture of the building. There was a little light on inside, it was getting dark so I decided to knock. Long story short it was Randy's brother Kelle! I was dressed as Ozzy when he opened the door. He spent almost 2 hours with me showing me Randy's personal things, amps, instruments. We have since become very good friends and speak on the phone frequently. Kelle is a sweet guy and so talented. I will say every show is exciting, every fan that I can hurl back to 1982 and let them live those days for a couple hours and the memory of Randy Rhoads is very exciting! 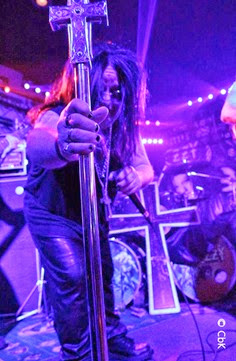 Lisa: Yes, you were on the TV show "Tattoo Nightmares"... tell us about that nightmare of a tattoo... what advice do you have for someone going into a tat parlor?

Little Ozzy: Don’t drink, think about what you want before you get it, and think about it for a long time because it is forever. It was great doing Tattoo Nightmares, Gus G. was the coolest to me! We even had lunch together! He is a great guy!

Lisa: What is the most heartfelt gift you were ever given by a fan?

Little Ozzy: We played a Casino in Iowa a couple Halloweens back and a fan showed up and gave me a beautiful black Cape, a handmade metal cross necklace and an Ozzy jersey! That really meant a lot to me. I must say when I am in a store somewhere in the middle of this country and someone recognizes me and asks me if they can have a picture with me. This is a gift that never stops, making my heart warm. I always thank them for wanting a picture with me. I have been giving a cool gift in life in my forties , I get asked for pictures and autographs not because I was on AGT but because people love me for who I am at 4ft, 8 inches and that means more to me than the project itself! People are great! 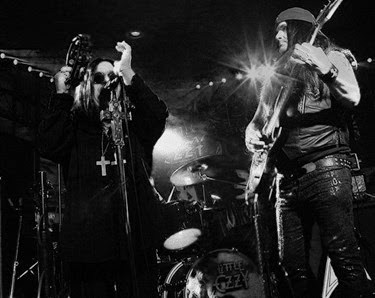 Lisa: What is your ultimate message?

Little Ozzy: My ultimate message would be not just the fact that if you are a little person or different than others, you can do anything you dream in real life. I say this to anyone anywhere in the world. If you can dream it you can be it. Oh there will always be scoffers and jealousy. I am still called crazy for seeking this dream in my 40s. I say to them BE GONE, out of my life. I do not want any negativity to affect the things I do with my dreams! I never dreamed in 100 years I would be back in to entertainment at this point in my life.

Truth be known, 8 years ago I had never been any further than a couple states from my home state. I had never even been on a plane. Since then I have been on over a hundred flights, I have rubbed elbows with some of the biggest celebrities and movie stars in the biz. I have seen the Grand Canyon, the beautiful Fl. Keyes, I have seen the Golden Gate Bridge, I have seen Chicago, LA HOLLYWOOD. I have sung my songs for thousands and thousands of people. I was even trending at number 4 on Twitter for 12 minutes. For 12 minutes Little Ozzy was the 4th most searched for name in the entire world! WOW what a feeling! 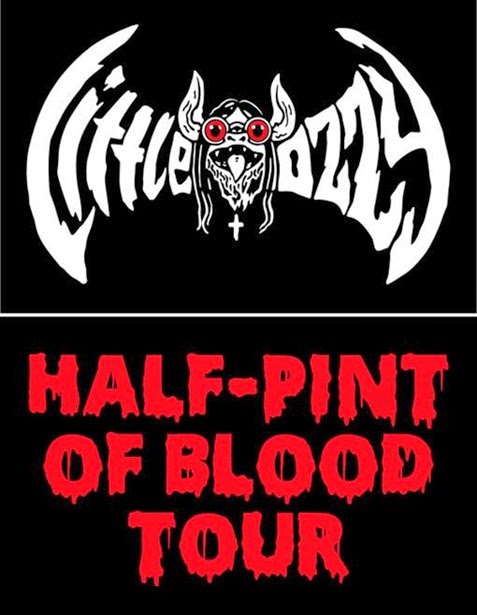 Want to know more about the ever growing popularity of Little Ozzy, visit his Facebook “Little Ozzy Rocks"

Little Ozzy is an artist that is as impressive as the man he tributes with his performances.