Oddbody’s Brings the Solstice to Dayton 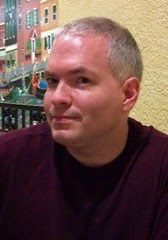 From The Pit – Music and Show Reviews

By Mike Ritchie for Xombiewoof Magazine

Saturday September 6th, could be seen as a night when the perpetually moving solstice of change and evolution in the Dayton scene was showcased on the Oddbody’s (www.facebook.com/Oddbodys) stage. The young, upcoming new blood opened followed by the established former instrumentalists with a new voice and the scene veterans played direct support to the national headliners. 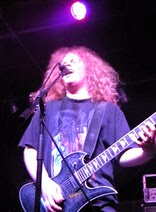 The origins of Crucifixation spawned when guitarist Max Mobarry and bassist Shane Tucker finally got a chance to jam during the summer of 2012. A few months later the two, along with vocalist Eric Bucio started jamming discovering a mutual love of intense metal music. Eric suggested they form a band and Crucifixation (www.facebook.com/Crucifixation ) was brought forth onto this earth. After a year-long search, they were contacted by drummer Jorden Garberson, who became the man behind the kit. They’ve assembled an onslaught of brutal thrashing metal honoring the greats and destroying those who stand in the path of their unholy Crucifixaters. 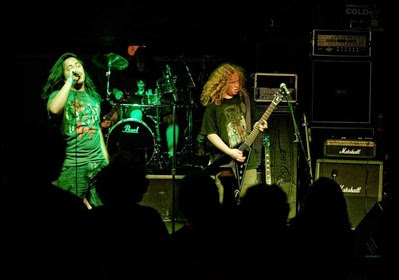 Playing hard and banging harder they tore into their set playing with an old school Sepultura meets early 90’s Florida death metal roar, throwing buckets of adrenaline and fury on stage. Opener Infestation carried the militaristic march of the young soldiers hitting with the first wave of heavy artillery. Redemption brought the slow, evil, seething technical death thrash slowly slithering towards you. Breastflesh cracked the bones, softening up the anatomy for the pluck pounding and Cannibal Corpse lyrics. Max Mobarry was definitely Puckin’ Around waving his long crimson red windmill mop at hurricane speed as they played homage to the game on ice and any other hockey masked guy prone to violence. What could be their future Toxic Waltz, Stand Up and Thrash had a nice bass groove with some Slayerish riffs and an almost boogie feel. Bucio delivered screams, growls and some spoken word vocals. Besides Death, Cannibal Corpse and Six Feet Under it’s fitting that Morbid Angels in there as Mobarry could be the younger doppelganger of Erik Rutan. 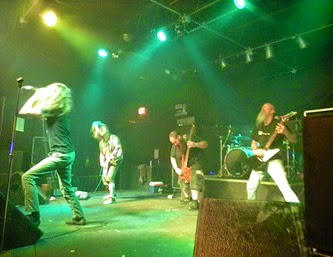 Zuel  (www.facebook.com/pages/ZUEL/212784892089384 ) now has the voice of Brandon Hawk, a younger Dan Lilker in appearance, and they started with No One Has Partied Here in Years, aka Johnny. They bring the hardcore belated hangover shoveling it in with bulldozer guitars, a bit of Fear Factory industrial tools, some sweet melodious Death courtesy of Uncle Chuck and some Morbid Angel signature guitar slides providing the musical diary and building blocks of a madman’s metal puzzle. Unfettered aka Year Long sounded like Opeth falling down an open air spiraling staircase, smashing into an ascending Mastodon during a lightning storm. Whisper in the Ear aka 1984 had a nice descending mental melody and deliriously mad, dark mood. 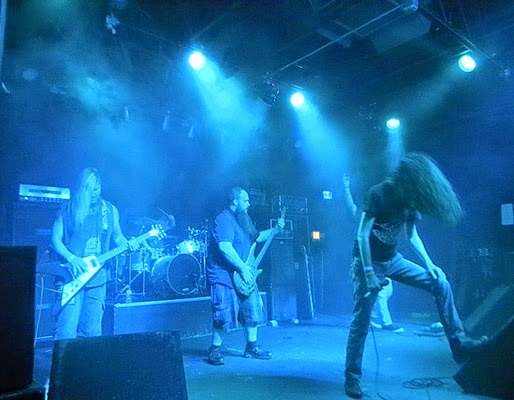 They finished with Take Kindly/Endless Rapture and The Flaws We Seal as Secrets. Keep updated on these multi-stylistic noise makers often seen at Hanks Pub, Oddbody’s, Blind Bob’s and on top of tall buildings being shot by proton packs. 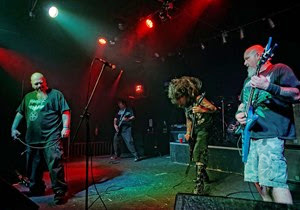 One of Dayton’s hardest working/scene supporting bands Forces of Nature (www.facebook.com/forcesofnatureband ) played the stage under the Oddbody’s banner for the first time cranking out metal meal riff-muncher Magnus Lee as Tate Moore summoned his inner cookie monster and accompanying serpents tongue. We took a lovely stroll through piles of death and carnage caused by one man’s madness and wrath or your favorite conqueror, tyrant or serial killer of choice. The Godsey’s, Jimmy Rose and Johnnie Wallace gave the Forest of Corpses life; Moore gave mutilation and anguish a voice. 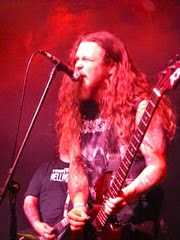 They played the stalking chainsaw wielding killer in the woods past midnight pace of Mary Hates Herself. It’s a wonderful life, live it loud and play it with metal. Quote, the Forces of Nature, Nevermore. Throwing Fists in the pit, it’s hit or miss, till you get your ass kicked for being a dick. Wallace continues to shine against two powerhouse guitarists bringing Dimebag’s spirit to the bass. They gave a loud reminder that we’re all dwellers on this Black Earth. A set mostly taken from the new Dark Ages CD ends with A.S.O.T. questioning God and country’s need for martyrdom and some seriously weird, creepy s**t descending down the walls as blood runs up.

From the air, heat, sand and dirt of Florida’s early 90’s death/thrash metal explosion spawning Death, Deicide, Obituary and Cannibal Corpse among many others comes the Solstice (www.facebook.com/Solsticefl/timeline). 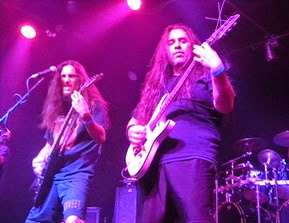 Founded by drummer Alex Marquez (Malevolent Creation), Rob Barrett (Cannibal Corpse) and Dennis Munoz (Iniquitous) and newly recruited Ryan Taylor (Atomik) on rhythm guitar and vocals they brought three records of speed and thrash to the stage. Taylor brought the noise Vio-lence to the forefront starting with an Age of Quarrel song from the Cro-Mags. 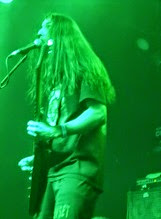 Starting from 1992’s self-titled debut, they dove straight into the darker side of the mirror on Netherworld. Upon the wastelands arose a true unholy decimator of all that’s conquerable with a Cataclysmic Outburst. The land of the free, pulled by the strings of filthy politicians, must be Cleansed of Impurity. By any means necessary. Aberration asks how much pain can we possibly bear with such a young soul. They send some respect to the Bronx, pounding with 44 Caliber Brain Surgery to the head, Demolition Hammer style. 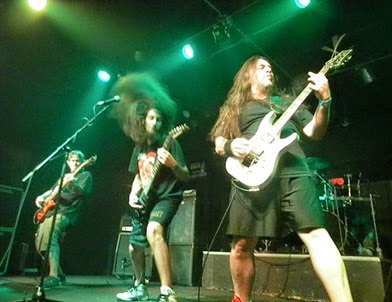 Plasticized, your aging body is rotten as you’re rolled up into a corner and forgotten. The Eternal Waking of one’s inner self to a world of inner consciousness and dreams. They took the first page from the steamrolling / wrecking ball guitars and banging bass book of Pray and played the title track prophesizing the triumph of science over the hypocritical elements of religion. Survival Reaction, seeing red as the instinct to survive kicks in, at all costs.

They play a Peter Steele tribute Carnivore style and possibly one of the reasons Playgirl called. When one is six-foot-seven, size matters. They end with the weak, aging mind Transmogrified by dementia and loss of faculties. 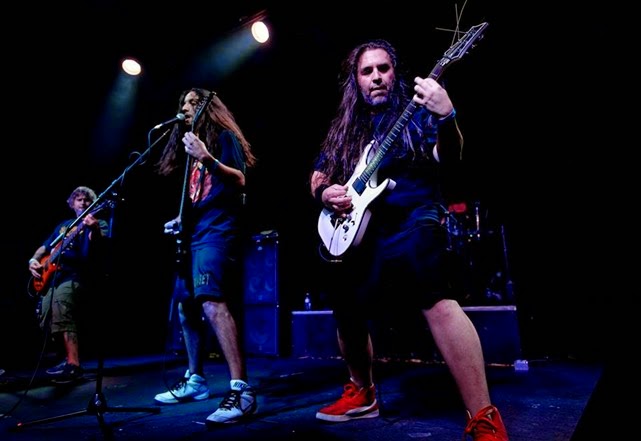 All other images by Mike Ritchie www.facebook.com/mike.ritchie.338?fref=ts

Read more from the pit articles and reviews by Mike Ritchie on his web site www.coveringthescene.com

Editor’s Note-On Saturday September 20th, for the 8th straight year Forces of Nature volunteered their time, working with event coordinator Jeanette Monaghan, performing at the Wright Pat Air Force Base Marathon. They played a non-stop, six-hour (7am-1pm, with pre-dawn setup/5:30 am sound-check) gig positioned near the last leg of the course. They banged and thrashed as over 15,000 runners went by, many raised the horns in respect and gratitude for the extra effort, adrenaline and energy to the finish line of the 26 mile trek. When the set-list started getting low their ‘late morning’ creativity-caffeine kicked in with adlibs and jams coming up with new material. Tom Wilson along with event supporter Kelli Wilson also made the early morning base trip making sure the heavy metal patriotism was documented. After playing all morning and a brief break Mr. Godsey spent the evening at Oddbody’s working security for the Nonpoint show. 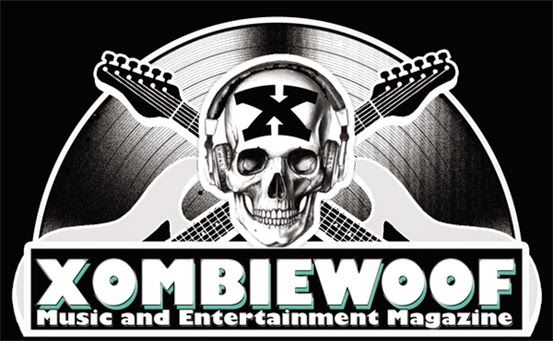